A fast paced game that has fighting and platformer elements based on the 3 Ninjas movies most watch as kids or adults alike .

The gives you the option to play as the three boys from the movies as well. I picked the boy called Colt in the blue top with the karate trousers who has a sword which you can use for fighting and you will often find rocks coming towards you .

Rocky is the one with the green karate top and karate trousers white  coloured on who has long wooden stick to fight people or other things. 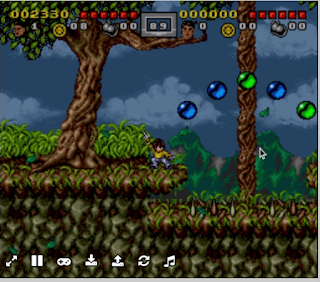 Rocky can use his reach to attack rocks that roll to you one hit will take down this object which can kill you  in the game. 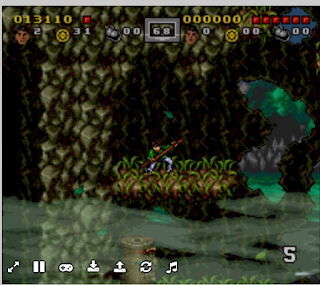 The enemies here can hit you easily so when you see them try and attack them quick to stop you from losing health each time it hits you or can kill you on it .

You collect silver colours  like   Mario here except not gold like the other games for this one.

When you get the weapon which can shoot at enemies is very useful for attacking enemies from the far and also gives you short of like gun style of game to it which for me is very cool overall.

The game is sort of like a puzzle in some ways with platformer and beatup added into the game and whenever you complete the levels you will get a short style line where the Japanese guy tells you information about what he's doing or wants you to do next which I found is pretty cool add on so has semi good story line in the game as well which is a nice add on feature.

I never played it when it came out since I did not ever get my hands on but playing it as an adult a lot of fun the only thing some people may find bad about it's very easy to die in this game since it a very fast paced platformer maybe the fastest created except for like Ghouls and Ghosts but still a lot of enjoyment can had from the game as a whole to me.