A Classic RGP from the Final Fantasy

You play the role of a Dark knight who  goal is to help the king who the guy admires in a great way over the king helping to raise him since he was a boy until he became the knight he is now.
The character starts of with Dark powers  called Cevil this means he's good in some cases but in other cases, he's pretty weak but he can become later on a light knight which is overall better since he can heal or fight well so no problem with him overall.
The game is turn-based game which I think overall be the best kind since you can plan more about the attack while relaxing or doing other things during combat plus I like the idea of being able to press  buttons to make action happen such as attacks or magic attacks. https://www.game24hours.com/2022/08/the-lion-king.html
You get a character who does summon and magic the girl who Cevil almost gets killed during his attack the girl character has semi-good magic powers but her physical attacks be weak overall.
Tellah as like the game best magic character if you need any Black magic done or light magic he can be good at that kind of support or attack roles but his physical attacks are weak overall you mean him in the first real dungeon where you go and try to help him look for his daughter as him being your strongest character at that point of the game overall.
After you kill the boss a water squid monster with Tellah you find out his daughter has died as such he trys to go after the boss who is Cecil replacement and the main villain of the game.
You now get new character called Edward he's a prince and has musical talents or healing but overall a very  weak character in the game I would say he's the worst character to play us with him you and the Summer now have to go to get the Ruby to save the woman that Cecil loves you go to the Antlion Cave to fight the boss and get what you need to save the woman Cecil loves. 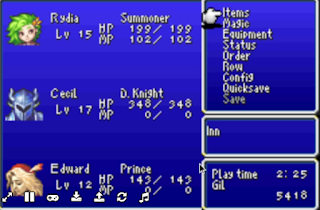 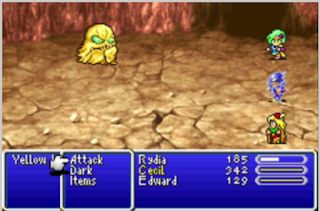 can only be killed by using magic so Rydia is the only character any use at combat against them since they only effective by magic, not physical attacks here.
Once you beat the boss here go back to the village with the  Rosa then give her the Sand Ruby which makes her recover more less now she can go with she is a white mage so good at healing but not good at attack magic or physical attacks here.
Edward now goes outside to think over life where he is combated by a monster with his vision showing him his past love Anna 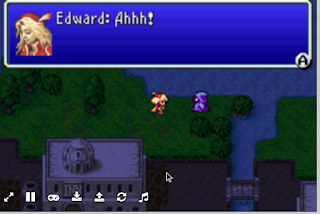 You can see Anna appear in the fight with Edward vs Sahagin telling him to keep fight on showing a love battle screen to me.
Battle in this part of the game semi easy such as even against these ones it's not to hard to win against them overall. 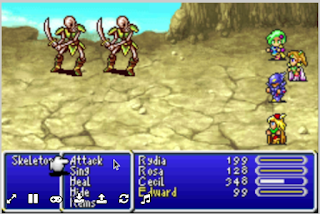 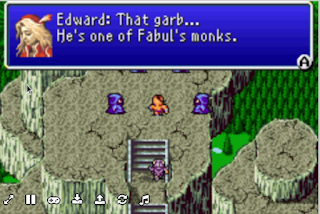 Yang is a monk who you get after winning the battle on the mountain here he is mostly physical attack character but has a good kick which can allow him to attack more than one enemy from the same attack.