The Adventures of Batman & Robin Review 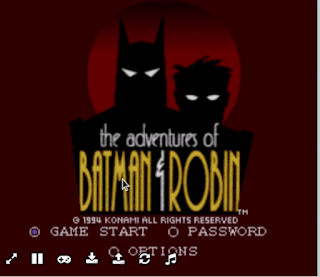 Is a very cool beatup game with nice Batman and Robin features the fight style to me is very much how like Batman would fit he has the standard punches to take down the baddies in the game but he also has tools which he can use as weapons against other enemies in the game.
I think it could be a game to play short term or long term games and in general never heard of any people complain about it overall so I would recommend it for any fans of batman or beatup fans it is more slow paced than like Streets of rages so if you found that to hard to win you could class this as like easier version of these sort of games if you found it hard this could be good play for you overall.
Graphics are good in the game for the 16 Bit system as well and does give it a very nice cartoon feel to how Batman or the other guys you fight against look in the gameplay  which was a good work by the programmers behind it.