The Adventures of Dr. Franken 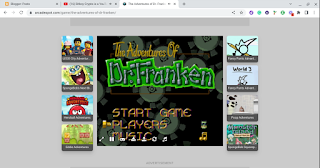 A platformer where the character is like a teenage version of the Fraken monster which has beat up features the idea of kicking your enemies makes it fun or harder in some cases but the fighting elements are the best seen in platformer so far you also get special moves which run out as well you can do kicks on the ground start kicks or the flip kick and also a jump kick as well it can allow you to take down the enemies .

You have time limit like most platformers of the time zone which was needed to allow the  data storage to last each level easily in some cases for why it was put into the gameplay.

I suspect a lot of people could get a lot of fun from playing this game short-term or long-term a like overall. 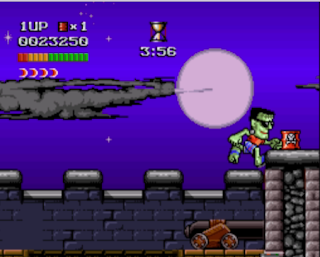 You have health going from red being the lowest health level and green giving you much health allowing you to take maximum damage at the health bar level overall the graphics in the games seem inspired by the 1990s style of cartoon for how the design of the castle looks to me or the cannon as well to me.