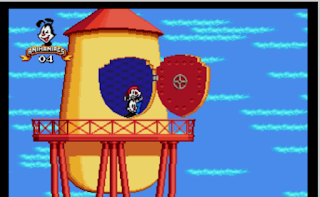 The style here you can see is very much pure 1990s graphic style even in the light blue that was very common colour to see in videogames or TV shows mostly targeted at kids overall and having lives in the game is a good idea since you will probably lose at least one life though out the gameplay.

A very fun platformer based on  a kids TV show of the past the idea of each character being able to do different attacks or moves is smart the girl can blow a  kiss as shown here . Kissing allows the girl to make characters such as men or birds move or perform action such as in this photo the man stops there so you can  jump on him then get to the next part of the level which is a very smart idea to include into any game to me .

The game is very puzzled themed since each character moves are needed to complete this game it kind of slow to steady based speed wise which means you can play the game and have enough time to be able to learn how to complete levels if you get stuck the first level easy but the second level gets quite bit harder to complete to me. https://www.game24hours.com/2022/10/angelique-review.html 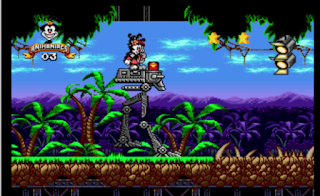 I think including the Walker from Starwars was very impressive idea here and this part of the game is so much fun to play since it can get you killed but you still get to see beautiful parts of the level and the spikes have a very strong 1990s feel if you land on you get hurt or lose a life here and the stars here are like points as whole so try and collect as many as possible in each level you play . 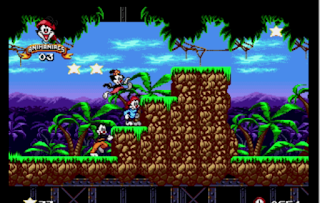 The idea of the second level of being able to rid in boat with animals attacking you or  men attacking you for me is very smart to see in action as a whole and something I think the creators of the game should feel proud about it.

The graphics to me look exact same as like the Cartoon mostly which is great to see as well.

The younger boy has a hammer as his tool to hit things such as he hits the cannon line to make it fire which is a very good piece of programming done to allow this function to work in the 16-bit system while you go inside it you see a good piece of camera work here in the gameplay when you land in the next part of the game.

The taller guy has strength has function allowing you to push boxes around which gives it a sort of Zelda feel to it overall. and he can use as his sort of weapon net on bag ping pong ball set which is sort of comedy style of weapon since can't hurt anyone in the game as a whole.