A very cool  beatup game I like a lot it has lady elements for how possible fighting may work for a woman compared to men which  I  felt was very smart and interesting to see it happen. 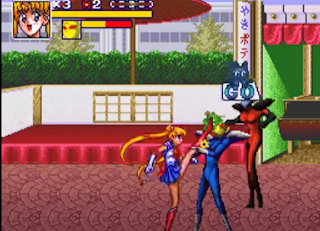 The fighting style is pretty smart and cool the idea you can perform a shot style of attack to reach far away baddies in the game the idea of them being women or like cyborg style, some  of the characters is very nice thing to see in any game overall it does explain to me why Sailer Moon was such as popular thing during the 1990s it was before my time so I never experienced it in it's heyday but it still seems pretty popular today so credit to the woman who created the manga for where it all came from .

Look at how good the animation efforts on her kicks or throw moves which looks so good and really blow my mind that simple 16 Bit system could produce like Animation of like good quality animation could be made for the system. https://www.game24hours.com/2022/12/bishoujo-senshi-sailor-moon-sailor.html

The display look very much like very high quality drawing or art done for the game it is as good as great quality Amiga game was during that time period and overall it has many good moves such as the throws you could do to knock down a extra enemy you will also fight enemies who from one like attack take down like half your health so it can be hard to win one which is great in any beatup games.

The boss fight first one is so cool she has like a shield so your gun attack style does not hit her until you get down her first bar of health which I felt was very good idea to add into boss fight and also she will take fight breaks into cheer sort of action where she gets other characters to help fight so you face of more than one baddie at the same time is cool thing to see in action. 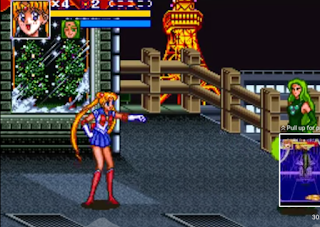