January 08, 2023
A good quality fightup the main guys you play of remind me of like a sort of street fighter look such as the guy on the red looks like the main boss from street fighter and blonde hair male on the left looks like a muscle version of RYU or Ken here very clearly.

It's fairly how if you play it on the hardest level but if you play on easy or medium it's not to hard to win against and you can see also see in the first level which I like a lot seeing planes having gun shoot at you that is pretty smart since you can use this to get the enemies around you shot so you can use them, in theory, to help you win battles to me this is like a much better version of the annoying motorbike part from other fighting games such as like streets of rage style. 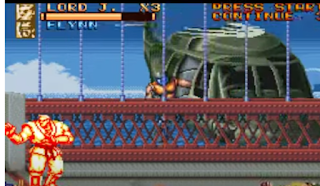