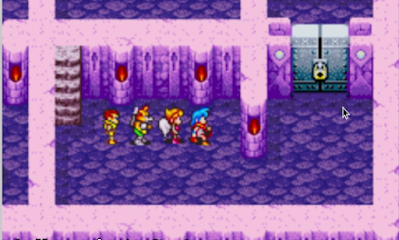 The game is one of the best RPG games made on the Snes or 16 Bit you start of the game with the main guy being attacked by Zog through the Dark dragons where the woman at the start turns all the villagers into stone to protect them from the Zog attack who is like the boss and the woman fights against one of his main soldiers and loses but what happened to her we don't https://www.game24hours.com/2023/01/breakthru-review.html

You wake up in the village after it being burned down you can get healed here the only thing I feel a bit annoying the starting characters are bit hard so you will die often here probably so make sure you get up to at least level 5 before you level this area then you can go onto the quest which results in you getting to a village where you go inside the castle you fight the first boss you get different village characters angel who can heal and be like the magic character she has the weak physical ability then you next get wolf who can walk across the wood more easy each character you get in this game has different skills with Bow he can go across the wood which makes the game easier to play.

You get the thief who can open locks or move about more easily which is cool but he starts off kind of weak attack or defense wise but when you boost up his skills he will turn very good later on fight wise .