A cool RPG style game where the clear 1990s style of graphics and looks and good colours has some similar ideas to like Secret of mana I find it cool and interesting you move around and the fight parts are kind of cool more like a platformer viewpoint which is kind of cool for the first battle you see in the game and you also get like secondary animals with you which I found pretty cool overall to see in the game as a whole. https://www.game24hours.com/2023/01/burai-hachigyoku-no-yuushi-densetsu.html 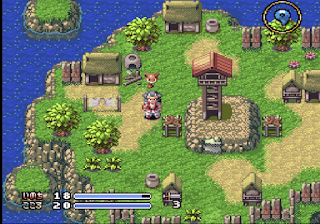 An in action role-playing game developed and published by Atlus for the Super Famicom in 1995. It follows the story of two heroes, one male and one female, who must save the world from evil forces. Players can choose their own path throughout the game, allowing them to explore the world, fight monsters, and collect items. The game features a unique weapon system, where players can equip up to four weapons at once, and use them to attack enemies. Additionally, the game includes a variety of mini-games and side-quests, as well as multiple endings.