A puzzle game with a cool animation style the idea is you are in a fantasy style of world where you get to play as one of the three characters where you use magic chalk to allow you to complete each level by removing bad part of the level  unit you get the majority of it cleared to pass the level. https://www.game24hours.com/2023/01/bust-move-puzzle-bobble-bust-moveeu.html 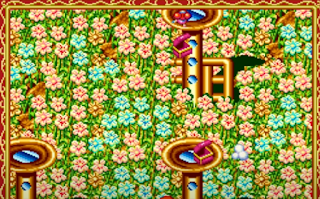 in Bizyland is an action-adventure video game released by ASCII Entertainment Software in 1992. It was developed and published exclusively for the Super Famicom in Japan. The game is set in a fantasy world, where the player takes the role of Cacoma, a brave knight who must save the kingdom of Bizyland from the forces of evil. Cacoma must battle his way through a variety of levels, collecting items, defeating enemies, and solving puzzles in order to restore peace and prosperity to the land. The game also features a wide variety of special items and power-ups that Cacoma can use to aid his quest. The game is highly regarded for its vibrant graphics and unique gameplay mechanics.