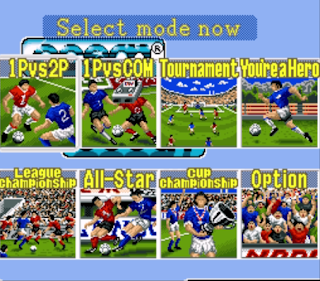 Big issue is the game is way to fast paced to make it an enjoyable experience to me in real football you go from slow-paced to medium to fast paced meaning you have no real chance to pass easy to the other player to be able to score and saving as like goalkeeper is very hard or fast to to do overall to much speed.

To me it would only be good to play long term if you were a robot so you could do it all automatically which if you could then it would not be really a game just  A.I sort of game for how it works overall.

The graphic looks pretty good to me for 16 bit and has like the painted grass which  was common on like the SNES or Nes or Megadrive for the look s of like painted colours of the game .

I think it could be okay to play with a human but against a real Computer team makes it to me no fun over to much speed for a human to be able to process how to do things so far for why I would not recommend this game but it is made in general by a good videogame company caned Ocrean who made a lot of amazing games in the past still popular today.