Where did the game come from?

It is based on a cartoon from the 1990s which only lasted a few seasons and had comedy elements that adult or children would like the idea behind it was monsters would get trained in high school how to scare kids.
You can jump or fight with your monster roar or throw things at other characters for the yellow monster and the black and white girl monster which also use her height to help you in the game some of the time the red monster has throwing attacks  as well. https://www.game24hours.com/2022/08/abc-monday-night-football-review.html
The jumping quality in this platform is to me very well coded for how well it works overall and the idea of things jumping onto the top of you as shown here is very smart in games like this overall to me. 3 Train
A lot of fun can be had for this game short term or long term it has many parts from the cartoon so if you liked the cartoon you will probably like this one a lot it also requires in some ways sort of like management mindset to complete the high jumps in this game which I found very cool and smart here. 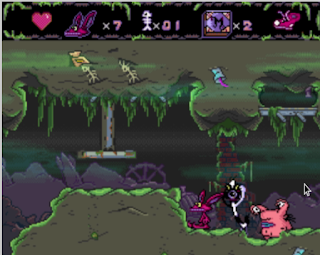 Getting killed can happen here quite often since it is a fairly hard SNES game not to hard but not to easy and you will sometimes lose health to the smaller enemies who are like the size of  inspects who can take your health fast.
The graphic for the game is almost a exact copy of the cartoon which is very impressive for 16 bit to produce such as high end graphics to me the music is from the show as well and also the sound effect sound as good as  TV show as well all of these things made a very enjoyable game overall and it's the same as the SEGA Megadrive version as well overall.