Many of you know about Apex Legends, which is a free-to-play hero shooter game where different competitors battle for glory, fame, and fortune. In this game, you can pick almost 16 different legends or play in classic, can do 60-person Battle Royale matches, 3v3 Arenas battles, and much more. Besides, in this game, you can choose different characters and modes. This game is available for different platforms, including PC, Android, iPhone, PS4, and much more. 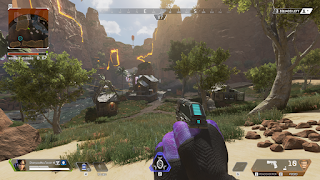 What is Apex Legends All About?

Apex Legends is the only battle royale game where you can launch yourself up into the sky and dodge bullets, and throw black mini games on the enemies. This is one of the best games that you can play in 2022 because it has many amazing options.

Since its release in 2019, it has continued to evolve in different ways, including content and fresh new ideas. Yes, that is true. They have added many amazing things to the game which are hard to avoid. You can choose almost 16 playable characters (called Legends) and use them as battle royale shooters. This game's concepts are like Fortnite, so we are sure many of you know how to play it.

In Apex Legends, you start a battle royale as a blank slate and define your role, which has its own set of special abilities and strengths. Besides, you can adjust the roles according to your requirements.

The thing we love in this game is how different Legends can interact and work together. In this way, they can get more powers and enjoy the battle. Apart from that, you can also assign tasks to other players and defeat the enemies easily. However, remember that you should have more weapons than the enemies; otherwise, it would be difficult to win the battle. Also, pin the right map locations, or you won't be able to land on the right spot, which is an important task of this game.

Is Apex Legends a MOBA Or Team Based Game?

Besides, Apex Legends has its own unique and new game features, which you can't find in any other game. That is the reason it has become more popular, and everyone loves it.

Many of you have already played Fortnite, and that is why you will see the same things in Apex Legends as well. However, Apex legends also have their own features that are impossible to find in other games, such as the characters, weapons, maps, and much more. To learn the game, you first have to understand how it works. Your character will first drop into a large map with nothing in hand and begin to search for weapons and resources. You will also see many other teams which will also be in the search for weapons. However, remember that you will be part of a three-person squad, so it is important to stay together so that you can have more chances of winning.

You don’t have to keep yourself safe in the game, but also make sure your teammates are alive and don’t forget to support each other during the game.

Communicating with your squad is an important step; otherwise, you won't be able to survive in the game. So, make sure to keep your communication skills stronger if you want to win this game.

On the other hand, you will see many other amazing features in the game, which will make it different from other games. So, if you want to play something interesting on your Xbox one, we recommend downloading Apex Legends.

What Are the Names of the Characters in Apex Legends?

Here are the top six legends that you can see in Apex Legends. These characters are free, and you can find them easily in the game.

The other two characters are as follows.

Each of the above characters has unique abilities and powers. You can choose the character according to your preference. There are three types of unique abilities that you will see in this character: Passive, Tactical, and Ultimate Abilities. Below we have explained what these abilities mean and how they work.

How to add friends to your squad in Apex Legends?

Many players don't know how to add friends to your squad. Well, it is a simple process. Below are the steps that you can follow to add your friends to Apex Legends.

Once friends are added, you will see their online status and send an invitation so that they can join the game. In this way, you will see a lobby area where you will see who has joined the game and also check their activities. This is how you can easily play the game with your friends.