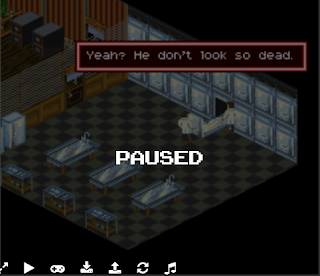 Cypherpunk means a game set in the future so has a futuristic feel to how things work in the case of this game it’s set in like 100 years into the future where magic exists in humans called mages or shamans in case of the main character he is called Jake and his shaman he follows Dog this is sort of similar to some of the ideas behind Native America where you pick animal who can, in theory, follow you for life and give you guidance. Kong

You start the game in like place for dead bodys where they think you are dead so you wake up then the two men in the white lab cost seem surprised and  scared you are to walk from here  so they shut their doors and hide only way you  can see them as jake you need to get your dark glasses from your flat then reappear here where they will accept you as like a normal guy .

The game has many RPG elements such as health being boosted or gun or computer or other areas you can shoot enemies to kill them or attack them using magic depending on your preference.

The game has many puzzle style of elements to solve for you to get further in life such as you need to check every area for clues of what to get next such as you need bottles to collect to put things inside such as get water from the fountain at the start of the game to make you get magic from Dog and dog collars from the same area as well so you need to check all parts of the game to make sure you can complete the game overall. 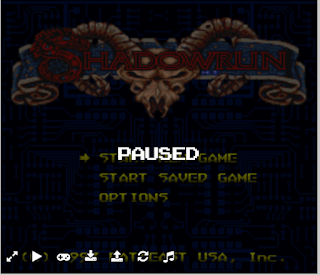 When you start the game it'll be about finding clues when you get enough you get sort of help from a friend who was the guy who helped hire you as like a shadow runner because you were carrying power or expensive stuff in your head they planted a bomb in your head to make sure if anyone tries to steal or play with it will destroy your brain with the data as well as such because of that the main baddie drake hires people to try and kill you to stop them being destroyed by the tech you carry in your head as such you get saved by another shadow runner who is a musician as well but just sings to help pick up like clients which I felt was good storyline idea overall.

She seems to like or fancy jake in the game as well which I feel for SNES games someone adding in a sort of love part is a good idea and also gives the game more of a feeling part to it instead of just like darkness or suffering over the idea everyone wants to, in theory, kill Jake to stop them getting the data which could then destroy the big boss in the game stuff.