The most popular Beatup game ever made some good points to explain first before telling fully about the game. 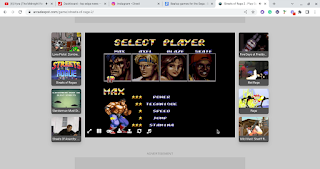 The music in the game has a very good arcade feel to it overall like what you would hear in the 1980s to like 1990s before in past in regards to how the music sounded at the older style of the arcade which I feel gives it a good popular arcade game feel to it one of  the things no one could do until the Playstation 2 was able to create Arcade quality of games but for Streets of rage to me they did this very well on the Megadrive overall. https://www.game24hours.com/2022/08/best-retro-videogames.html

Weapons can make the game a lot of fun such as the knife allows you to do quick attacks which are very effective against like some of the bosses or the other characters who carry the knives as well .

Crowbar is in a lot the classic idea of what thug used to carry in the Western world instead of like gun or knife often so it was good idea  including this into a game the crowbar gives you good reach allowing you  to hit enemies who are far away and it’s also very good at allowing you to be able to attack bosses easier through are quick or can attack you faster so having this in place can allow you to get hits in faster overall.

All weapons run out of health once you use them too much so be aware it can go anytime after too much hitting around 3 hits before they are gone normally.

Bosses are normally the most fun part of the game overall they will often require you to do  fight better to take them down easy overall.

Fighting is like how street fighting works for how you play the game but with wrestling style included in some of the moves they can do for a 16 bit system the combat you can do with it all is for me pretty impressive overall.

You can play as four characters which include Max who is like a strong wrestler focused on mostly strength attacks overall.

Alex is sort of in the middle for being the second strongest without him having to much weakness except for like jumping overall.

Blaze is someone who has perfectly balanced skills level so no advantage or disadvantage with her overall here.

Skate is someone focussed mostly on speed and jump but his strength or attack can make him harder to win with some of the time plus he can’t take many hits which do not help when against bosses overall.

Max is the strongest in means you prefer slow but powerful moves he is the best but his speed bit slow or his jump is weak overall so be aware of that when against faster baddies in the game.