A Real classic game it was released in 1993 for the Super Nintendo it was a puzzle platformer. 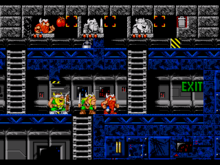 You could say in some ways nothing was ever this fun to play gameplay wise in some ways it was like being a comedy Viking based game with many funny or interesting parts to the game.

Erik  is the leader of group who can run fast and jump and ram his head into things based on how some people believe the Vikings of the past acted over being super brave and tough in combat or other things they did on the open sea or on land alike.

The character you need to keep alive like the other two since to play this game each character comes with skills you need to solve the puzzles in each level.

Baleog is the one who does the fighting with his sword and bow  and arrow this alone makes the game a lot of fun to play and one part a I suspect a lot of people will like it his house make fun it is to fight the monsters or aliens in this game can’t really beaten for the fun in this game overall.

Olaf  is your defense character who uses his shield to block attacks plus glide through the air which I always thought looked so cool to see in action or doing it yourself  and the idea he always wants food is good comedy element to add to me overall. With the shield, this can allow you to use it over the man head to allow Erik to use it to jump from the shield to get to higher locations which is a big part of this game working together with all the characters to make yourself complete each level.

Each level you play means you need to get to the part of the area which says exist that is the goal of each level to get to this place then get onto the next level until you complete this fun fast placed puzzle sort of game.

The game is both a puzzle and roleplaying and a platformer so games in the past could ever top them in this area even now many game companies could never create such a enjoyable gaming experience for me overall which shows you in a lot of ways this storyline was like 20 years in the future for how good it was and I doubt any game will be able to beat it in the three key areas being fun and funny together all the time you can get fun of playing it even in 2022 which is good and interesting.