Why is Super Ghouls 'n Ghosts such a unfair experience?

When you play the game it has nice graphic or a sort of dark feel to it game play wise for you fighting demonic sort of enemies in it but what makes it such a unfair game when you kill something another 1 or 2 reappears right next to you giving you no away  enough to give into a suitable space to fight again and the rights you use are throwing when the enemies are more less always in fight of you it would better if you have both close combat weapon and different weapon that alone would make the game more fun and fairer. 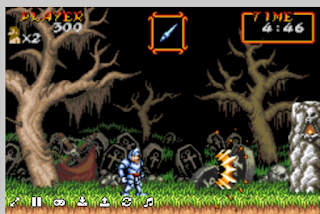 I don't mind hard games but feel this is just like anti the player for how it's setup since when you kill anything more less always enemies right next to and with your attacks so slow speed wise you don't have enough time to win speed wise and your enemies attack same speed as you meaning you have no way to get attack often first or if you do down to luck for a lot of the time. 3 Ninjas kick back

The health of two hit when you die for such a hard game seems very unfair I would say 5  hits before death be way more fair even on the easiest level it's like you are playing at normal to hard level for how hard the game is for anything even jumping 2 times to get over things seems a bit stupid when you have so little time to fight one jump should be done instead of two that alone would make the game a lot more fun plus more fair this is an overall very anti fair idea which is kind of stupid to me .