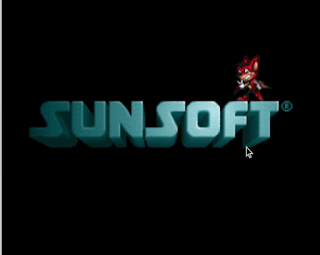 Starting screen which shows the main bat character with the brand name of SUNSOFT with a background.

I find it a silly idea for a platform that does not allow you to kill the bodies by dropping  on them which makes the idea of not being able to do that stupid to me it should happen when you consider how often. Acro bat 2 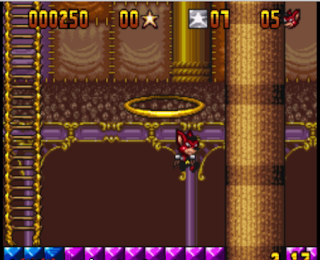 Shows good circle level with the gold ring and shows the bat character which is doing a jump at the moment and he can take more than hit which can be useful in the game but he has also 5 lives to start with which is useful since it's a pretty hard game overall and the floor design in the first level to me was inspired by the amiga since that colour or looks were in a lot of Amiga games. 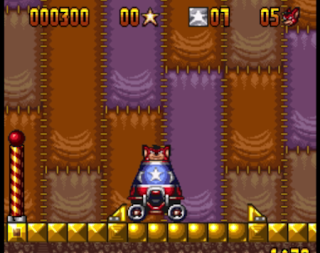 Shows him inside a cannon which is coloured in the American flag style which I found smart and it looks like at the bottom it has like wheels to the left and right of the centre part of the bottom of the cannon and to the left of you see stripe with red dot on which seems like Amiga design as well or the wallpaper is Amiga styled as well which is interesting see on a SNES or Megadrive game having a system which is a lot more powerful appear  right on lower end system case you don't know Amiga was the most popular computer in the past better than old Apple or old Windows overall.