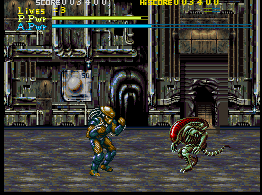 It could be fun short term or long term a like and the delay graphic wise is amazing for a 16 bit system the idea of throwing a spear against the aliens is very smart idea overall I suspect they were inspired by like streets of rage for a lot of the gameplay logic to me overall.

You play a similar sort of character as the predators from the movies it's a good fun game overall and I think could be a good game to play even for people more into modern games but who still enjoy the beatup gene of games overall.