A remake of Pokemon Red with modern graphics added in a lot of people felt the graphics on the Gameboy colour were often lacking since it had many limitations for what it could handle Data wise as such this game was created as good remake in regards to how good this one looks compared to the first Pokemon games.

The storyline is more less exact same but some other monsters are included in such as like monkey you get early or Pikachu who is a powerful monster to get early on in my thoughts plus Rattata is a very powerful start pokemon who can do decent attacks or has pretty good defense only problem with him he likes good special attack overall compared to like Abba when he involves later on. 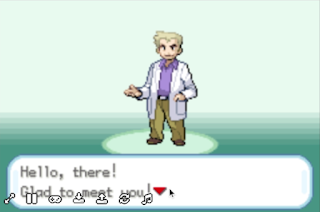 Pokemon hospitals allow you to heal your pokemon which is done for free I always thought that was a smart idea in a game instead of paying money for them often in other games for healing features overall and to get your pokemon all you do is walk in the grass then Oak will explain the risk of going there then you pick your  Pokemon  then you fight against the rival here known as Green here or Red or Water in the other games or Gary as well he can be known as well.
You should win it easy normally once that's done the game starts proper you need to get the map from Green or Gary's house once you get it head into the town and start to boost your mon levels here as much as possible to get read for the next battle with the rival who's now level 9 so get up to that or higher and he will have a second pokemon at the same level so get to that or better when possible. 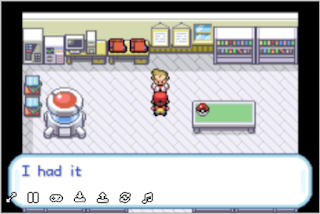 Shows Ash next to  Oak and also Pokemon Index at the starting part of the game .