Very cool style of both animation,RPG,Strategic,mech style for a  snes game and have so many  game styles in it is very impressive the animation battle when you attack happen between each mech is very 1990 animation style for how the combat looks and I suspect on the Snes system it would be very hard to make such a high quality videogame within only 16 bit because even some Playstation games could not produce such high quality effects or graphic during combat.

The storyline is all set in Japanese but I still had a lot of fun playing it as a whole you can if you ever played these sorts of games like advanced war you will be able to master most of it quite quickly even if you can't understand the Japanese language when  I tried it had not really any issue over language problems and to show you to how good this looks checkout this image here. 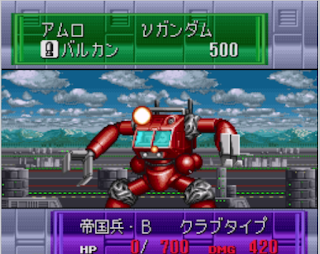 It has a sort of cross between mech and transformer movies for the style of all the robots you see in the game or bit how the combat looks when you watch the animation happen here.