A Fighting game kind of like a street fighter with strong animation feel it can be faster than a street fighter as well which is cool but fast enough most players could find it easy enough to win at the character design is probably the best ever seen on a street fighter clone so far and also when you win fights two times you can boost up your stats so it has like RPG  elements which is very rare for the 1990s time period.

The music in the game is heavily inspired by street fighter music and when you hear another fighter better hit it will sound very similar to the street fighter sound effects.

The graphics in this game to me look so beautiful as shown here. 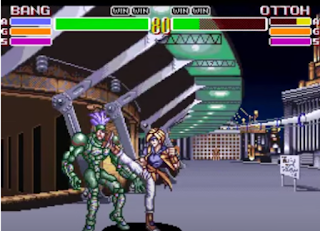 When you win a battle you will hear this message at the end winner Bang or winner another one name instead you can see A for Attack and  G for Guard  and S for speed the motion of how the attacks look are very impressive for a 16 bit system to me I suspect this game pushed the Nintendo to the max for the power of it to make it happen so well the kick here is semi fast but you can do much faster moves as well which is nice to see in action.

You also get special fighting moves  very similar to the street fighter style which is nice to see someone clone it but make it have much more than being a similar copy here so all credit go to the people involved in making this game.