A Classic game popular around the world for it's beatup setup inspired by Teenage mutant Hero turtles.
The gameplay could use two players which was a lot of fun with friends at the time for why it become popular . 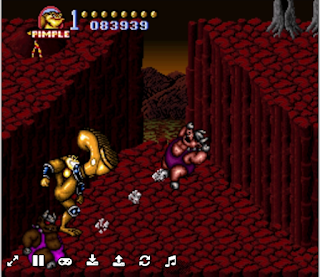 Cool music from the very 1990s style it all.

A lot of people around the world consider this one of the best beatup ever created the reasons for why include .
Exciting
Tough
Fun
Good music
Good graphic
Sort of hard Arcade feel to it all
Very 1990s style.
The special effects from fighting or doing moves always had amazing graphic feel to them all.
Toughness may seem a stupid or weird idea but this is part of what made it so fun you could win easily get one or so enemy then the next ones kills you .
Music of the game is still popular even in 2022.
Beatup during the 1990s were all the rage as such many ones were created all the time.
All the videogame console makers wanted to produce Arcade games for the 16 Bit consoles .
None could do it over lack of consoles or software capitable to produce them at the time but Battletoads had a good try.