Has some similar elements to pokemon instead of like the pokemon animals you have manga style of people to fight for you and have a nice harmless feel to the storyline like Pokemon had during this time period.

Special effects very decent in and I like the idea of the first fight in the game called Persian attack found that very smart idea.

You get a diary to be able to save the game and also you have Black cat as like guide or helper which I found smart since a lot of people around the world love cats as pets or friends.

The storyline is very deep for a game on the 16 bit time period which impressed me  kind of annoyed I never played this game as like a child instead of like adult.

The battles is turn based game. 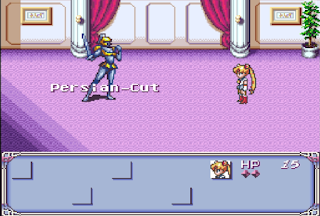 The graphic here look so cool during the battle for how both the character you play as and also the enemies look so cool here to me.

The idea of dreaming the games and you play it out like you control your dream is a very smart plot twist in the game and the style in this part of the game looks like an incredible Anime show for 16 bit I suspect they used the Snes to it's power limit here pretty likely.