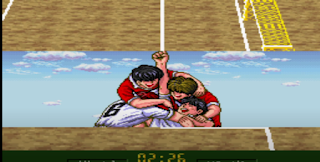 Probably the best football game on the 16 Bit out of the Snes and Megadrive one which really blow my mind is how well it played from being a player or the goalkeeper and the keeper is able to save in a very pro level like a real goodkeeper which is not common during this time period.

Most of the other football games for this time period or older often look very crummy or terrible looking and would often play bad such as one game you can play by shooting in your own goal or another one and still get goal points for each goal put into the next that was a fairly big problem in other football games during the 1990s time period or older as a well. https://www.game24hours.com/2022/12/the-blue-crystal-rod-review.html

It is quite fast moving almost like how a real football player would play the game you can pass the ball or take shots in a very efficient way.

You can also take throws in the game very well here and allow you to possible score a goal from it all or land a goal  later on from it all by the good programming put into this game. 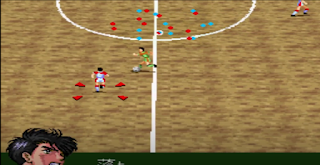 You will often see animated woman speak which I think is a  smart add on feature  for videogame and very common in animation or Manga things even today a like.

The tackle you can do in the game a lot of fun and very good coding must have being done to allow it to work so well I suspect here to get the ball of the other player.

The game lasts 10 minutes 5 minutes for each half meaning you can a decent amount of time to be able to score 1 to 2 within each half fairly easy if you practice enough doing it all.