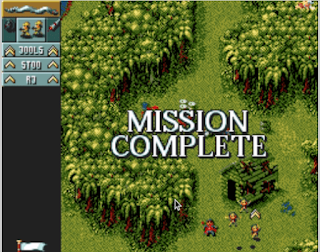 Cannon Fodder is a 1993 war-themed action-strategy shoot 'em up game developed by Sensible Software and published by Virgin Interactive. Players control a small platoon of military soldiers, each carrying a rifle and a limited supply of grenades, to complete a variety of missions, such as destroying enemy bases, rescuing hostages, and securing enemy documents. The game was praised for its mix of strategy and action, as well as its dark sense of humor. It was released for the Amiga, DOS, Sega Genesis, and SNES platforms.
The game has very really cool both shooting and strategic logic behind it and the idea of it being made so you can only shot or move at different press of the button you can't do both of at the same time gives it good amount of hardness when you get later n the game to me is pretty cool. https://www.game24hours.com/2023/01/california-games-ii-review.html

I like a lot you go up the ranks like being a real solider in the army where you go from like private up all the ranks as you play it more and more you find it becomes harder as such as you get it easy first level then it will become almost impossible to complete without losing soldiers each time and like the idea of  cross whenever you lose more solid kind of like how army battle work in the  real world.

The music behind the game is legend but during the time a lot of armies people took offense to the idea of making joke of being a solider I don't believe that was ever the idea of the creator they more wanted to make fun game as the real goal here and the music is still popular for the rock and the creator own song wars more fun is still very popular even today since sounds interesting or fun a song to me.