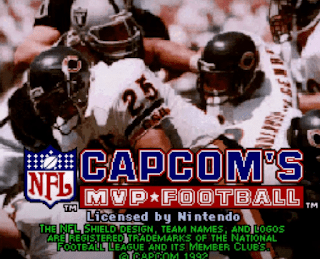 Capcom's MVP Football is a 1993 American football video game developed and published by Capcom for the Super Nintendo Entertainment System (SNES). It is the first video game based on the National Football League (NFL). The game features a traditional 11-on-11 game with two teams of eight players. Players can choose to play any of the 28 NFL teams, as well as four all-star teams. The game also has a number of options to customize the game, including options to adjust the rules and penalties, as well as the ability to create custom teams. The game also features a full season mode, a practice mode, and a two-player mode.
A game based on American football it has good elements to it like strategic management feel to it which I find kind of cool for how to order how your players will start the match I think it could be a lot of fun for people into this sport or gameplay style but scoring  a touch down with how slow paced it is may annoy some people I feel it could have being made better if it was more fast moving or bit easier to score would make it much more enjoyable gameplay. 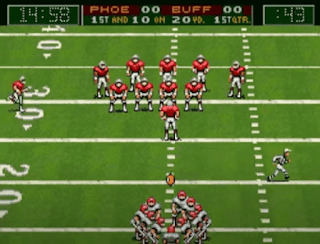