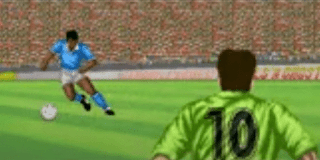 A fun realistic football game only thing that may annoy some players is how fast-paced it s to me if they slowed it down by like 2% make the gameplay a lot better as a whole . https://www.game24hours.com/2023/01/capcoms-mvp-football-review.html
The gameplay for this game I think is probably the best out of all the 16 Bit games since you can headbutt the ball or do throw in lines or long kicks or tackle well in the game all the games of the game of football have been done very well and foul in the games to me most of the time seem pretty fair you could argue this game is better run than a fair amount of modern football matches on the TV or BBC or other football show host channel as a whole to me .
Capcom's Soccer Shootout is a soccer video game released for the Super Nintendo Entertainment System in 1993. The game is a simple soccer simulation game with basic gameplay and controls. Players control one of four teams, each with their own unique abilities, to compete in a series of matches. The objective of the game is to score more goals than the opponent. The game features a tournament mode, where players can compete in a single-elimination tournament to determine the winner. The game also features a practice mode, where players can practice their skills and refine their strategies.