Captain America and The Avengers Review 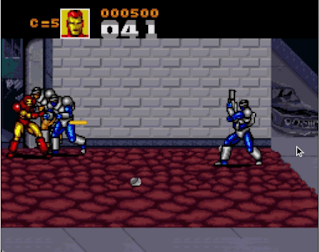 For me probably the worst beatup game ever played here is some things that make it very bad the other characters move to fast so the idea of being able to hit them all without being hit is more less impossible to without using rob or software to make it happen also your attacks so weak  if you could kill enemies with one hit then I guess them being fast-moving would make sense but it does not here. https://www.game24hours.com/2023/01/capcoms-soccer-shootout-soccer.html

The attacks are kind of boring the straight attack or throw weapon which none of them gives more power to me the throwing weapon should give more of a power which would had being good idea and also to the graphic look pretty chunky as a whole nothing really to brag about here overall.

I can see why the firm made this game to build off the popularity of Captain America and the Avengers fanbase but outside of that nothing really of any value was made compared it to how fun Streets of rage is or final fights or even the lesser well known beatup games they all beat this for gameplay or general fun only part I would say is pretty good to  see is like the comic book idea of seeing the story playout but except for that nothing good even the practice is worst I seen since the character does nothing you fight against and to me it reinforced to me how bad the moves are in the game as well so you could argue the practice basically tells you the game terrible.

Captain Commando is a side-scrolling beat 'em up video game developed and published by Capcom. It was originally released as an arcade game in 1991, and was later ported to the Super Nintendo Entertainment System in 1995. The game follows the titular character, Captain Commando, and his three allies — Ginzu the Ninja, Mack the Knife, and Baby Head — as they battle against the criminal organization known as the Skull Cross Gang in a futuristic version of 2026. The gameplay consists of navigating stages filled with enemies and obstacles and defeating bosses at the end of each stage. The game features power-ups, combo attacks, and special moves.