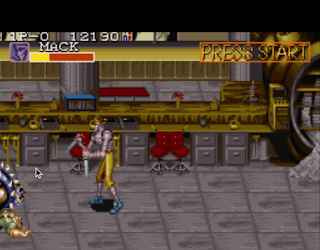 The main thing I dislike is when you do your spinning attack you lose health which I always felt in video games is very stupid overall.

It has more of a dark feel to fighting games to me overall and the moves are a bit limited only have a normally attack on the ground and a throwing attack if you get close enough to someone else or a power attack which takes health you can get weapons like pipe I guess from the streets of rage ideas I found the weapons here graphic wise look very cool. https://www.game24hours.com/2023/01/captain-america-and-avengers-review.html

To me, easy is pretty hard for the game gameplay is more like a normal level of hardness to me  so it should be made bit easier here but you could probably win it without losing lose as long as you don't use the powerful attack the boss here moved pretty fast and I  thought for the first boss having someone to attack you while fighting it was not good idea have in the second or third boss fight and also it has 7  levels which is pretty good and the number of characters you get 5  to pick from the game all look pretty random sort of like cyberpunk and horror mixed in together for looks of them.

Captain Commando is a side-scrolling beat 'em up video game developed and published by Capcom. It was originally released as an arcade game in 1991, and was later ported to the Super Nintendo Entertainment System in 1995. The game follows the titular character, Captain Commando, and his three allies — Ginzu the Ninja, Mack the Knife, and Baby Head — as they battle against the criminal organization known as the Skull Cross Gang in a futuristic version of 2026. The gameplay consists of navigating stages filled with enemies and obstacles and defeating bosses at the end of each stage. The game features power-ups, combo attacks, and special moves.