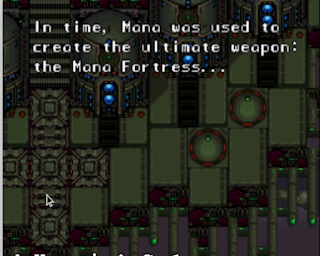 The starting part of the game you see the Mana Empire building in action used by the Empire in the past or present during the game the future screen you see is very well designed to me looks wise and the dark green and the blue lights on the power part of it look fantastic to me.

The dragons when you get the device to summon it allows you to call for a dragon which can then fly you to any location on the map when you see the map from the dragon's viewpoint the graphic look incredible for 16 bit machine which is very impressive showing the lack of graphic possible ways of the past it could pass in some ways as better than a decent amount of modern games for the graphic in some ways.

Cannons allow you to get to locations faster than walking it can be an interesting or sort of funny experience the first time you do it but a very smart feature in the game either way. 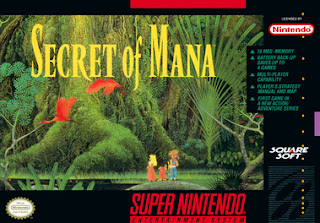 You get magic from each seed you get mana released from the first one you get water which allows you to get cured or cast ice spells it can make the game this kind a lot of fun and good ways to try and stop you drying as much as possible as well plus it looks amazing when it goes into action as well.

Sword is the starter weapon for me it’s a lot of fun using this one overall but using the bow can be fun shooting at enemies from far away you can also use the whip as away to move around more easily plus give you a distance attack as well which is very cool overall.

The spear is good for any kind of battle and gives you more reach than the sword as well.

You start of like the boy who finds a sword then monsters start trying to attack or hunt him down to steal the mana sword of the boy.

The next character you get normally is the woman who finds the boy in the pot ready to get cooked and eaten by orcs when the woman saves the boy is meant to go with her to save her boyfriend or man she fancys a famous night the second boss here is kind of hard to win without magic or low quality weapons or level wise to start with sometimes.

The other one you get is girl known as spite who tricks the boy  to give them money to pay the girl money for her fake condition for being small she then agreed to go with the boy and  woman and she also comes with a bow and arrow which can be useful for some kind of fights overall.

Mana sword is like the purpose of the game characters to restore it’s power to allow the boy plus the girl and woman to save the world from the evil empire and the mana creators the mana power is known to restore peace to the world.

The storyline is interesting overall and very well told me overall in the game you see many good storylines for example when they meet the witch we learn she used to be a nice old woman but then started trading people for herbs of one of the bad guys that alone is good storyline or part of the  story which many people I suspect would find interesting or good story overall.

We find out the main character is in reality related to the mana people or the mana tree in a way which is a good add-on idea to the plot of the game overall.

You go up levels as you go through the game overall it can seem hard when you start off but over time as your skills and level go up it will get easier until you like face the mana beasts then it gets bit hard again as well but not too hard overall.

The secret of Mana is an action role-playing video game developed by Square (known as Square Enix now). It was released in 1993 and was one of the top video game hits of the era. It was originally released in Japan as Seiken Densetsu 2 and it’s the sequel to the infamous Seiken Densetsu released back in 1991, known as Final Fantasy Adventure in the United States and Mystic Quest in Europe. Secret of Mana was the first game of the series marketed under the Mana name.

The campaign of the Secret of Mana takes place in a high fantasy world. The story revolves around an ethereal power source called the “mana”. An ancient civilization that happens to be very technologically advanced, builds a flying warship called the “Mana Fortress”. This angers the world’s Gods and to war the civilization, they send giant beasts to the world. The war goes globally destructive and nearly all signs of mana vanish from the world. That’s until a hero uses the power of the Mana Sword to destroy the mana fortress and civilization. As the game opens, an empire seeks to restore the 8 Mana Seeds, which have the power to restore Mana to the world. This, ultimately, would grant the empire the power to restore the Mana Fortress.

The empire is manipulated by Thanatos who has evil plans of creating a new and peaceful world. After the empire successfully restores Mana to the world, Thanatos betrays them, kills the emperor and his people, and seizes the Mana Fortress for himself. The heroes’ trio goes on to stop Thanatos in his plans by visiting and taking advice from the Mana Tree. In the end, the trio ends up defeating Thanatos and the world is restored to its peaceful state.

The gameplay of the Secret of Mana comprises a top-down view just like the majority of role-playing games of the 16-bit era. In this top-down perspective, the player can navigate the heroes’ trio, i.e., a boy, a girl, and a sprite. The player navigates through the terrain and fights hostile creatures by controlling any one of the three characters. When the control is passed to one specific character, the other two characters are controlled by artificial intelligence. However, two or three players can also play the game simultaneously, controlling two or three characters at the same time. The players can take refuge in towns where they can regain their hit points (HP) and can also purchase equipment and restoration items.

Each of the three characters has their unique strengths and weaknesses. The boy is not able to do magic but is great at fighting. He’s also able to master weapons at a much quicker rate. The girl has average combat skills but is very useful for supportive

purposes. She can cast restorative spells and can heal her fellows during the battle. Last but not the least, the sprite has incredibly offensive magic skills but isn’t good for melee combats. After collecting enough experience points, the characters can level up and achieve improved abilities like strength and evasion. The trio can use a total of 8 weapons throughout the campaign. Except for the sword, all other weapons can be upgraded for a total of 8 times. Alongside that, each character can have a skill level for each weapon, ranging up to 8. Magic works pretty much the same way, with the exception that magic points are reset every time a spell is cast.

In 2018, Square Enix released a 3D remake of the game. It was a food for thought but as reviewed by many of the reviewers, it lacks many of the classic elements and vibes of the original version.