Breath of Fire I Review

A RPG with a good storyline behind it all

You play the role of blue haired boy or man called RYU depending on what you want to call him as well in this  game you play the role of the Light Dragon warrior .
When you first start the game of with a good storyline where your village is attacked by Zog of the Dark Dragons. 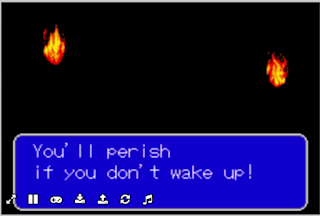 During all this battle Sara trys to save the village or members from the attack by Zog forces she is taking hostage in the game but she turns all the village including the main characters into Stone when he wakes up and the other village it's being burned down more less except for like the village hall or the Dragon Shine area you can save the game from the Dragon shire or if you get killed you go back to that area which I felt was a smart idea to make gameplay more enjoyable than the usual gameover idea in many other games often. Breath of Fire II 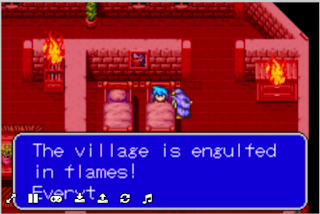 Once the main part of the introduction is done you need to get to at least level 4 since you have no herbs or other healing magic or items for now so get to that level before you  head to the next town.
When you get to the town you will find out Zog has attacked the village and the king is outside the first quest you need to complete in this area make sure you gather all the weapons or armor you can to boost your attack or defense and collect the herbs to make getting through  this part of the game more easy.
Try and get up to at least level 6 before you fight the boss here you could do it at 6 maybe with enough herbs but 7 a better level to win here I believe so try and do that before moving onto the next part of the storyline overall. 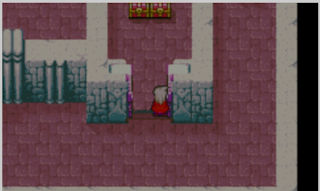 when the characters  get poison the hair will change to white which I felt was a very good use of creative to make the character feel older than he is looks wise by that creative idea to me.
The first boss looks like over size  Green Slime monster he is not hard to win against one heal from herb should give you enough to win against him quite easy then this part of the game is complete for now.
When you beat the Slim Boss you should reach around level 8 in all the tests I did so far into level grow tests which should make all the enemies at your current area become very easy to beat overall.
When this is done you need to wait until it's night then sneak into the village but be aware if a guard sees you get thrown out then need to go back until you can get into like the horror castle style of the building once in there just collect as much items as possible then you will find the boss who looks like knight he is kind of hard for early on the boss since he can heal throughout the boss plus his standard attack pretty decent as well and also his magic thunder attack can do a lot of damage to you may use all your herb during this boss battle so make sure you have at least 6 herbs before you battle him. 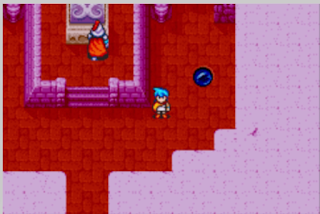 You pass the destroyed village you made before and now enter a village called Wialot which has angel sort of characters in it .
Getting your first character which is called Winlan 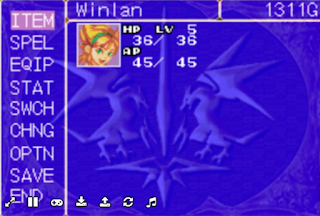 This woman is good at magic healing or attacking a bit as well but her physical attack or defense is kind of low plus low HP as well. 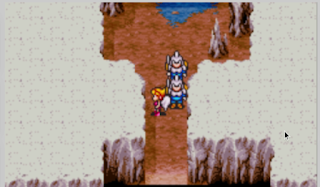 When you get to this part of the game you really need the soldiers to give you the physical strength or Defence here if not you would get killed often unless you were at least like level 10 here to me. 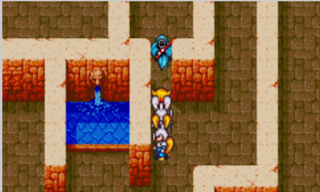 This blue Mini boss like Grime Reaper us fairly hard to take down and once you do make sure you get your health and other stats back from it from the blue water shown in this picture here also make sure your boost attack spell then it will make winning this easy. 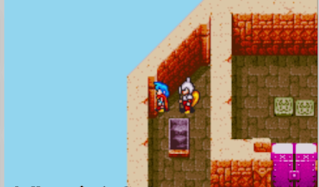 Shows RYU here after flying from the village castle with the red coloured flying man it is a good design display here like a lot here and the purple doors I found very attractive design-wise here. 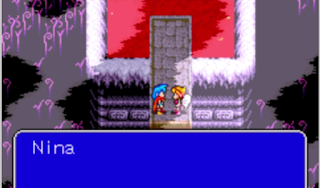 After RYU beats the boss here you will get Nina as your magic character she can heal you well which is useful when you spend more time on this game in my viewpoint. 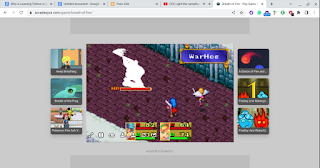 Warhog to me looking like pig is both bit funny or bit dark that was big reason for why so many people still like SNES RPG since in a lot of ways they have amazing displays often on even the simple monster which often have good looks to them.
The monster here can be killed by one to two hits normally.
The boss fight from Pog he not hard to win against really just keep attacking until he dies level 12 is probably the minimum you can do it at overall I always found the boss designs were very cool to look at overall. 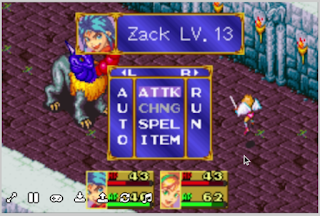 The monster looks kind of like a demonic cow for the bottom part of the leads and for the yellow part kind of like beard yellow coloured fur here with both a blue and Red Dragon style of heads here. 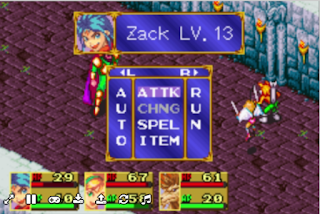 For the boss coming directly after the one above he was semi hard but not to much but you need to get healed if your health is a bit low as shown here then hit it with attacks until you beat the boss then move on the next part of the games but getting out of the area is bit messy so have patience here if possible. 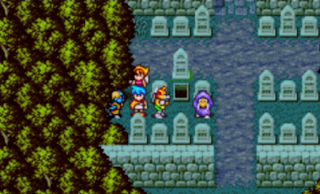 Graveyard showing up with Blue Zombie to the left of RYU and to the right be the old lady telling you to go down the hole this part does not take long to get what you need to complete this stage. 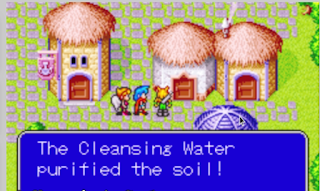 This is part where you see the village is now purified allowing you to get further in the game . 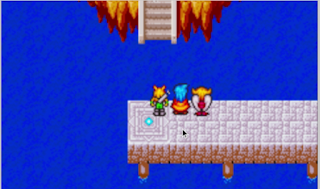 When you collect the talent which will allow you to cross the water then go into the next storyline scene here  and the graphics showing cave castle going towards the bridge looks nice from a delay viewpoint in my mind. 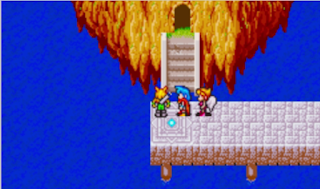 Once the tablet is in this what we see and now we can go inside the base here. 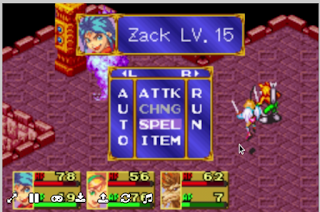 Shows the demonic style of the boss it's semi hard boss but you should be able to win by getting Wing girl to boost the attack of both RYU and Bo make sure the attacks do good damage as much as possible while she can heal when you need to get your health  up to a reasonable level try and stick to at least 40 health when possible to stop you losing anyone during the boss battle once you win you get a ring to allow you to get further into the storyline. 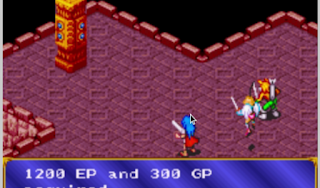 EP  means experience points here and GP means money or gold in other games .
Has to be here again Amiga graphic style showing up here. 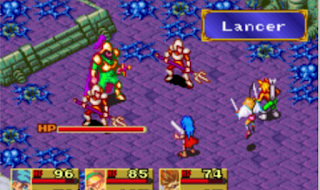 Boss is fairly easy here just take out the lancers and the boss will be easy enough with some good hits here to me .