This game is the better batman game overall it makes sense since beatup but fast paced one you can do punches or kicks or throw your batman bat at enemies to make them temporary not able to move which can be useful since it's overall a very fast beatup game to me  the moves are useful when you fight the clown at the start who can fire at you it's good idea you can show him with your bat to make him temporary not able to move but I found it kind of smart if he shots wrong he can hit one of this team as well meaning you should in theory use him as like support player in the game to help you fight others in it which has uses in the game you can also use throwing of the other characters as way to knock down or kill the other baddies in  a game which is a good idea to me. https://www.game24hours.com/2022/11/batman-forever-review.html 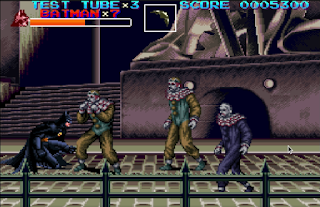