Probably the most fun pinball game I ever played normally pinball gets kind of boring once you can learn to do it right that's you done it all kind of like 10 pin bowling being easy over time as well but in this game it's much more fast paced plus the idea of you being able to attack robots is very smart and it also has in some ways like tactic feel to how gameplay works such as when you shot inside the robot belly for one them he sort of like eats it which is pretty impressive for a 16 bit system to produce such a good quality display.

The animation style is very cool to see in action and how you power up the ball by holding down a button is smart since it could mean you start slow or faster depending on your preference. https://www.game24hours.com/2022/11/battle-master-kyuukyoku-no-senshitachi.html 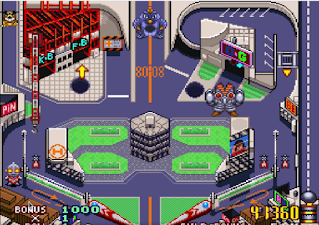 The idea of you having like 2 parts fo the pinball game if you screw up the top  part you can still do well playing the game or in some cases go above the first level of the game which is pretty smart idea so if you are into pinball then this is a great game for you play whenever you in the mood from this kind of game.

The style looks  like racing track which I found very cool idea for the display background and like how the gray robot looks on the bottom left and robot on the left and robot on the top centre who collects balls and top right area bigger robot again is very smart to see if you hit he gets destoryed.

The object in the centre next to the four parts of grass if you hit I will robot will open come out of it which is very smart special effect to me.