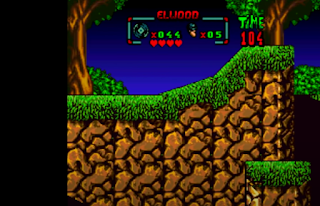 A platformer based on the Blues Brothers movie from the past it's fairly fun but nothing to cool about it's very much sort of like the ultimate general style of platformer in the sense you could  swap the blues brothers for rabbits or alien or cyborg or anything else it would not look wrong here since it has so many different elements from the platformer styles of the past. https://www.game24hours.com/2022/12/blue-legend-shoot-review.html

Jumping can get bit annoying here for landing on enemies plus losing lives here is very common as well which does not help make the game fun I can see the logic behind them making it to get money from the popular of the Blues Brothers from the past if you just want a new platformer game to play it's fine but if you want a good quality game it's not right for you to me.