Bubsy in Claws Encounters of the Furred Kind is a side-scrolling platformer video game developed by Accolade and released for the Super Nintendo Entertainment System and Sega Genesis in 1992. The game follows the titular Bubsy, an anthropomorphic bobcat, as he travels across five levels to collect yarn balls. Along the way, Bubsy must avoid enemies and obstacles, such as birds, dogs, and robots. The player must collect the yarn balls and make it to the end of each level before the time limit runs out. Bubsy in Claws Encounters of the Furred Kind was well-received by critics and was followed by two sequels: Bubsy II and Bubsy 3D.

Is it the worst game or terrible as many people always claim? No, it's like all games has it's good and bad parts for the only bad part if  get hit once you die seems a bit unfair when the enemies are pretty tough to jump on often but I like how he spins when he jump attacks on the enemy this gives it a very cool effect.

The animation style of the character to me looks incredible as shown here. 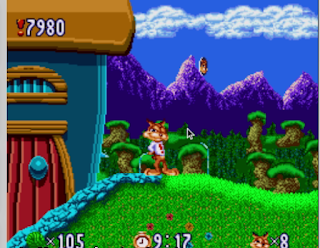 The style of colours in this game look very much like the 1990s style of cartoons to me which look so cool even today. https://www.game24hours.com/2023/01/brutal-paws-of-fury-brutal-animal.html

Why exactly do so many people complain about this game often well in similar terms it was try at making mascot like Sonic or Mario so as such some people felt it was just copy which in reality it is very different gameplay for how he attacks or acts such as his smile is very well designed and could pass of as good as how a human can make  facial expressions to me.