Has a very Amiga look to it for the animation style of the characters or part of the games which if you were  bit older or used older games then you should like the style of this kind of game a lot.

Has a very 1990s style of gaming experience to it being platformer but styled in the sort of Arcade style of being fast-paced overall.
The storyline is kind of basic a Alien steals the World cup from the winner competition before then the Alien crashes which leaves the kid to go around the world to bring back  all the parts of the Cup from say London in the UK to Moscow in Russia to the other countries.
Some people may get killed often on it such as SNESDrunk claimed he found it hard to not get killed playing it as such I would recommend you just do a bit of training if you never played a game like this before . https://www.game24hours.com/2022/08/rock-and-roll-racing.html
I would agree the Camera is a bit poor in this game for what you  can see but if you can handle that it is still la game with a lot of fun jumping over holes is a lot of fun to me better than Mario in this game overall plus the enemies can be kind of hard some of the time such as the construction man who throws a tool at you is pretty impressive for 1990s games graphic or quality wise to me.
Your weapon is a football which you use to attack enemies by shooting it at them or headbutting the ball towards the baddies kind of like a ball version of a gun for how you hit the enemies overall. https://www.game24hours.com/2022/08/rock-and-roll-racing.html
A lot of fun for all ages to me to play it and the storyline is kind of simple but the platformer storyline don't really matter I kind of wish they would make a newer version of this game but not sure if this will ever happen .
A  perfect game for any football fan around the world since you can do headbutts on the ball or long shoots or short shots on enemies or use it to allow you to jump higher so kind of  like you can do all the tricks using the ball as like you can do in real life overall.
Rats are easiest to kill characters overall with just one hit but because they are small in height hitting them can be sometimes a bit hard and all other characters take between 2 to 3 hits to kill normally. 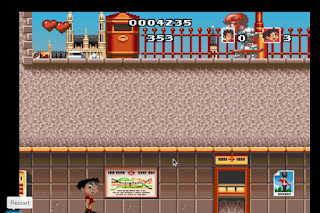 Made in 1993 by Krisalis Software who created and published it around the world it was first released for the amiga case you don't know was like the PC or laptop of it's day and in some cases was the most advanced computers made for older time such as a computer in Canada still powers the heating system connected to Amiga which means it still works okay after like 40 years so far.
Idea thought up by a big football fan and programmer called Dean Lester who worked on before Manchester  United Franchise and uses the game engine as Arabian Knight.
1992 they developed a Physics Engine may seem weird to younger people but in the past this was amazing software or videogame creation for the time period overall for why it was liked by many people around the world even oo it was for some people bit hard since it required in some cases a football knowledge to understand how to play this better overall.

It was release for the following games systems

Some other released were created but never released for lack of time to me .