The game was meant to give an arcade feel to the SNES game as such as it was made very fast-paced and full of metal music. Donkey Kong

A lot of people who even hate the game love the metal music from it much more like a sort of 1980’s movie music soundtrack than a videogame as such as the music helped build up the popularity of the game even when I was a kid when I played this it got me very into metal music as a kid which me still liking the bands or music from the game all the same overall. 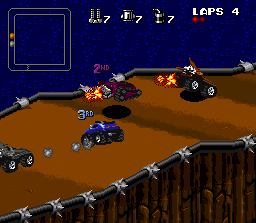 You start of a small or weaker car but you can upgrade it so it does have like RPG elements in the game  as well and I always found it bit funny one of the characters from the game looks like RYU from Street fighter in it but a wee bit different looks to him I normally play as him and different characters have stats which can be good depending on your play style since each one can work well depending if you prefer speed or something else overall.

The weapons in it are pretty good such as the mines you can drop if another vehicle goes over it can get destroyed or simply lose health in the car overall and you get a laser weapon sort of like space movie style of colour used by aliens in it overall .

You can play using mostly the weapons to destroy the other cars to win some of the time or all the time in some cases so you just destroy them then drive off which is common practice in Rock and Roll caring overall and overall very fun way to play it as a whole.

You can as well just play by driving without using weapons in some cases but this can make things more complex when you get to harder levels some of the time but some, in general, more prefer the driving physics to the battle part of the game.

You can also do racing and battle to win it as well. Rock and Roll Racing

Each time you win all the races you get the chance to buy a car upgrade then move to another planet then race against harder enemies and the levels will often get harder for most people in some ways the race track is like a puzzle in the game since until you know the tracks well enough it’s easy to fall down holes or go the wrong way some of the time so practice in this sort of driving game is very important overall. Kid

Some people even today believe it’s the best racing game made which includes me as well for it’s fun fast-paced racing elements and fun elements over weapons it’s hard to beat even in the modern world we live n overall .