A Fast paced RPG is very different to how the Snes game plays out such as there is a big diferent in you having to play more as shadowrunner to make it through the game plus money is much more important in how gun place works here plus you run out of ammo here but in the SNES form you don't .
You can pick three classes which include ,Samurai, Decker,Gator Shaman
Samurai means you take on more of a combat role in this game for why you have better defence or attack than the other two characters and your fighting style is mostly about guns or weapons phyical ones here compared to like the Gator Shaman who will mostly use magic later on but can use weapons as well the main problem with the shaman if you give him physical upgrades it makes his magic weaker so don't use it on him when possible.
Decker is like a hacker so be aware if you want to do computer work they can be good but not as good strength as the Samurai but the speed they start with is impressive overall and when you need money bad in the game having someone who can hack for you can be useful overall.
https://www.game24hours.com/2022/08/shadow-run-snes-review.html
Jake starts of the game at the motel to find out what happened to his brother it turns out he was killed on Shadow run mission with his best friend who is like modern Native American for how he acts or looks  and your brother in the game best friend .
When you start the game you need to pay for your brother's stuff so you become Shadow runner for the first Johnson is what you call the guy who pays you to do Shadowrun for him it can mean you get paid money to buy things like ammo or better weapons or  body protection or allow you the money to hire other Shadowrunners you need attack, decker and magic all three to win this game or play it well having all three of one kind can make things easy or hard or impossible in some cases so try and take one character from each area of skills to make the game more fun to play overall. 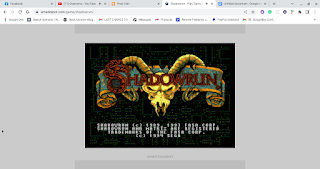 Game Gear
The game is fast-paced and you need to be good at shooting or you can get killed easy when you start of getting killed does happen quite often so be aware of that for why you need to focus on speed and defense or body to make your character stronger to stop him dying as much as possible and also focus on getting money to buy the best body protection which costs around 12,000 when you start off but if you get more karma skills the cost can go down more and more but when you get it dying is harder except when you against like bosses or monsters overall  but if you fight like monsters like the red dogs magic works well on them normally so try and use that against them when possible and the best gun in the game be a shotgun so try and get that whem you are  fighting enemies to make sure your attacks are good overall.