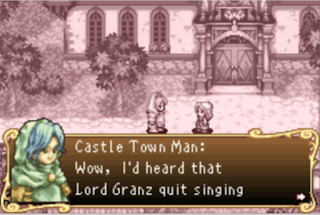 Showing Black and white colours in the RPG of the past was powerful way to make it seem serious or exciting some of the time or show the past as well for why colour style was used so often all around the world. 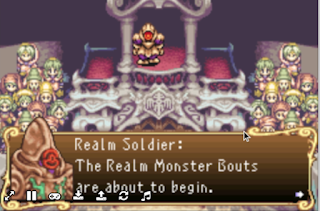 Showing the Realm Solider speak before the first battle begin here I felt was a good idea for the best way to start the gameplay. Secret of Evermore

The boss you fight is like a monster form of bear for how it looks and is mostly yellow colour you can win the   fight easy with just like 10 hits roughly to take down the  first boss. 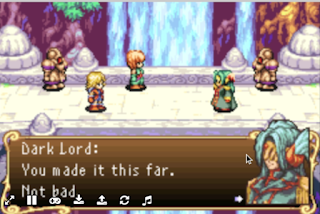 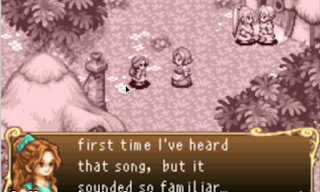 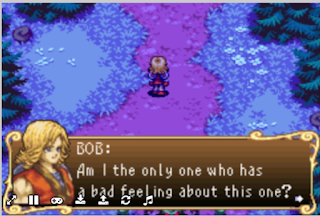 the messages the storyline players see or say is interesting to read most of the time since it's like in some ways you are playing the game as like a Hollywood movie from the 1990s before the modern movies all turned terrible more less. 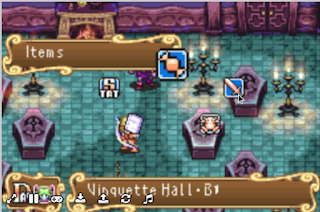 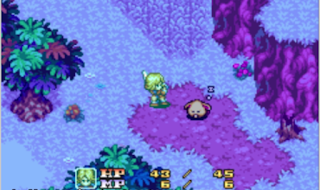 The story is very action paced overall you see the game in black and white in the past this was popular viewing experience to make the things seen more dramatic overall once that is done you wake up as a grown adult if you pick the boy in jail where you fight a monster like big  sort of bear monster once you win then you try and get away where you meet the Black knight with bob who offers you to join him and become a knight which you refuse then you go to fight him which you lose then you get knocked of the bridge then this rabbit looking merchant guy finds you and then saves you using the fishing rod to catch you then you can start playing the game you can pick combat level boosting I normally start as like the monk for max attack when you first play it taking down enemies like wasp are kind of hard so boosting levels important to make you be able to win easy overall.

Puzzle elements in this gameplay is sort of like zelda in some ways for example in the  Jadd Dessert you press button like sand area which is similar to how the Zelda games of the past or present from these games which is very smart part of it overall.

The game has in some ways like a maze  which is   impressive for  a  Gameboy Advance  system.

The storyline for me is overall the best out of all the Mana games for how fast-paced it is and also the fighting methods from like swords to knuckles or axes or other weapons change so much which is very impressive for Gameboy advanced graphics and the team behind this game put a lot into the storyline or the gameplay or the game engineering side of things to me which I liked a lot.

Night time battle means some of the enemies are asleep which can make killing some of the bodies more easy or fun but tougher enemies normally exist at night such as like the bat which can be deadly at the start of the game if your level is to low overall.

Swapping characters like the Dwarf as first swap from the girl is both fun and interesting to play with   you also get Amanda who has spear and has good magic and attack skills overall which is a good character pity she dies  so early on the game I felt she should have lasted bit longer in the game to me. 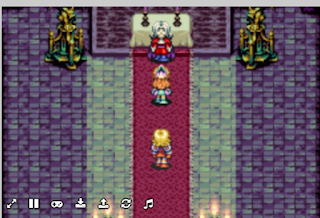 Shows you the Vampire boss before he turns into the boss who you fight after this part of the storyline. 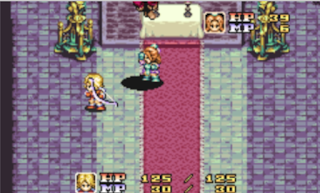 You can only see the feet of the monster but you can find it yourself by playing the game fairly easy it's a very fun boss to play against my overall favorite boss from the game .

Once the battle done it is agreed he will release both the girl and his sort of wife to be the woman who when she leaves she then trys to marry the Dark Lord oddly enough but it shows you prefer strong men to marry overall.

The music Lester Amanda brother players it sound like high quality opera music to which I think is good thing to input into a RPG game  in general.